According to Eastern energetic physiology, humans have three important energy centers, located in the center core of the body that store & collects energy in much the same way as a battery does. These three centers are called the “Three Dantians”. In terms of Medical Qigong Dantian is referred to as a “field of energy” or as “cinnabar field” or “field of elixir”.The Three Dantians,act like an alchemist’s crucible, or cauldrons in the role of gathering and transforming vital substances, energies, and various elements of awareness.The ingredients of the inner elixir are Jing, Qi & Shen. The goal of the inner alchemists is immortality,a complete transformation of Jing, Qi & Shen, since they are the three fundamental energies necessary for human life, and to accomplish this transformation, alchemist’s first gather and transform Jing into Qi in the Lower Dantian. They then gather and transform Qi into Shen in the Middle Dantian. Next, they transform Shen into Wuji (the absolute openness of infinite space) in the Upper Dantian. Finally, they merge Wuji into Dao (divine energy). These transformations can be compared to the changes of water (the consistencies and not the temperature), which when heated, can change from solid ice, to a liquid, and then to vapor.

Tai Chi/Ji Pole:The Three Dantians are connected to each other through the, the Taiji Pole which acts asa passage way for communication between theThree Dantians, and as a highway for the movement of the various life-force energies. The Eternal Soul is drawn into the body at the moment of conception through the Taiji Pole, and departs through it at death. The Taiji Pole of the body is comparable to the central axis of the Earth, North Pole and the South Pole. The North Pole is similar to the center off the head and the South Pole is similar to the perineum. Inside the human body the Taiji Pole acts as the “still point of man”.

A great stillness is experienced when a Qigong practitioner gathers Qi into the Taiji Pole.Extending from the body’s Taiji Pole are the 3 Dantians, 5 Jing-Shen (5 Element Emotion), and the 8 Extraordinary Vessels. These vital energetic systems feed all the major organs and the body’s 12 Primary Channels. As the 3 Dantians absorb energy from the body’s Taiji Pole, they also extend,or “feed,” and energize the body’s Yin and Yang organs, 12 Primary Channels, and 8 Extra ordinary Vessels. 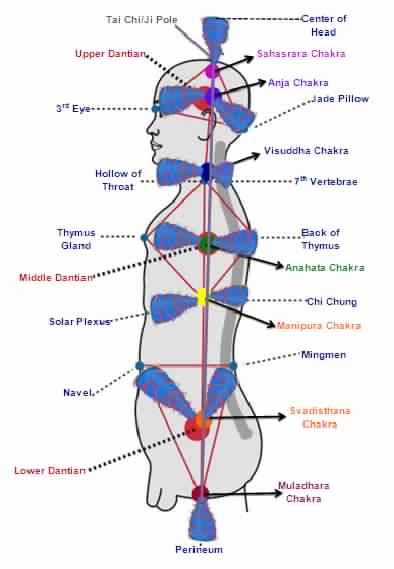 THE TWELVE GATES OF THE CHAKRA SYSTEM: the Three Dantians also connect to the body’s major energy doors,known as the Twelve Gates of the Chakras. These Chakra gates are superficial, on the surface of the skin, and are not as deep as the Chakra Cores and Three Dantians which are all connected to the Taiji Pole.The word Chakra in Sanskrit is called the “wheel or disc” which is the size of a ten rupee coin. Energetically the Chakra gates look like funnels or vortices of Qi. Each funnel extends and expands its energetic vortex out into the body’s Wei Qi field. As energy travels up and down the Taiji Pole it creates an energetic pulse. This energetic pulse resonates out from the body through the Twelve Chakra Gates, and can be felt several feet from the body. The bottom Chakra is located at the perineum and only has one gate, as does the top Chakra located at the top of the head; the second, third, fourth, fifth, and sixth Chakras have two gates each, one on the front of the body and the other on the back of the body. The Twelve Chakra Gates serve as subtle energy distributors,which help absorb and distribute environmental Qi to the patient’s organs, tissues, and major nerve plexus areas closest to each gate. Each Chakra gate is connected to its own potential of psychic perception, interfaces with the body’s nervous system, and is associated with a different endocring land.

Each opening of a Chakra gate may result in a spontaneous emotional release. Some of these releases can involve painful memories that have been dislodged from the energetic filter (or veil)that envelops the Chakra gates. This energetic filter prevents external emotional traumas from entering into the body’s center core.A Chakra gate can become stuck open, closed,or may also tilt out of alignment with the TaijiPole,causing Qi Deviations that may result in a distortedor obstructed flow of energy. This obstruction may cause physical, as well as psychological,stress or trauma. The release of these emotional traumas can be overwhelming and painful if the patient has not prepared for, or does not understand the nature of, these transitional energetic malfunctions.